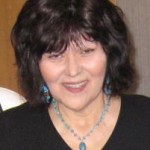 courtesy of the author

Stella Pope Duarte describes the cathartic moment she realized she was born to be a writer, and muses on writing “from Arizona.”

Audio clip: Adobe Flash Player (version 9 or above) is required to play this audio clip. Download the latest version here. You also need to have JavaScript enabled in your browser.

Don’t have Flash(TM)? Click here for the MP3 file

Inspired to become a writer through a prophetic dream of her father in 1995, Stella Pope Duarte is described as a “magical weaver with a sure hand and a pure heart.” She is praised as an author who “will enlarge humanity.” Twice awarded a creative writing fellowship from the Arizona Commission on the Arts for her first collection of short stories, Fragile Night, (Bilingual Review Press, 1997) and her highly acclaimed, debut novel, Let Their Spirits Dance, (HarperCollins, 2002), Duarte has been described by critics as a “major, new literary voice in America.”

Ms. Duarte’s work has won honors and awards nationwide. If I Die in Juárez,
(University of AZ Press, 2008) received a 2009 American Book Award and a Pulitzer Prize nomination. It was selected as a “Top Pick” in the Southwest Books of the Year Competition, and was awarded the Arizona Book of the Year Award for “Best in Popular Fiction.” The novel was also awarded two Gold Medals in the category of “Multicultural Fiction,” by the Foreword Book of the Year Award, and the Independent Publisher’s Book of the Year Award, as well as earning an Honorable Mention in the International Latino Book Awards. In 2008, she earned first prize in the 34th Annual Chicano/Latino
Literary Prize from the University of California at Irvine for her short story collection, Women Who Live in Coffee Shops and Other Stories (Arte Publico Press, 2010).

Let Their Spirits Dance is on the Book Sense List, and was awarded the AZ Highways Fiction Award for 2003, and nominated as a ONEBOOKAz in 2004. Ms. Duarte won the 2003, Excellence in Latino Arts & Culture Award, and in 2004, she received the Barbara Deming Memorial Fund Award for an excerpt from, If I Die in Juárez. In 2005 she was awarded the Outstanding Alumni of the Year, by the American Association of Community Colleges. In 2011 she was honored with the Women in American History Award from the Daughters of the American Revolution, and the Professor Alberto Rios Outstanding Literary/Arts Award. Ms. Duarte is a highly sought-after inspirational
speaker for audiences of all ages. She was born and raised in the Sonorita Barrio inSouth Phoenix.

Stella will be making several appearances in the Valley in the next few months, including March 8, 2012, she participates in the “Women Writers Panel for International Women’s Day.” The event includes panel discussion, Q & A and refreshments.
Arizona Historical Society, 1300 College Avenure, Tempe, AZ 6-8PM.
Contact Dianne Post for more information: [email protected]

Audio clip: Adobe Flash Player (version 9 or above) is required to play this audio clip. Download the latest version here. You also need to have JavaScript enabled in your browser.

Don’t have Flash(TM)? Click here for the MP3 file